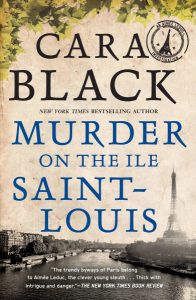 “Gripping… A wonderfully complex plot is lent immediacy by environmental activists agitating against a proposed oil agreement…. This Paris has a gritty, edgy feel, and Black’s prose evokes the sound of the Seine rising with the spring thaw. Aimée makes an engaging protagonist.”
—Publishers Weekly (starred review)

A distraught, late-night anonymous phone call distracts Aimée from her deadline and sends her to the courtyard of her Ile Saint-Louis building, where she finds an infant girl. After the caller never shows up for her baby (whom Aimée decides to care for), Aimée wonders if the woman may have become an “Yvette,” a Jane Doe dragged from the Seine. Her partner, René, urges her to turn the baby over to the authorities, but for Aimée this is too close to her own abandonment by her mother. Meanwhile, a group of environmental protestors is trying to stop the government from entering into a contract with an oil company notorious for pollution. As Aimée attempts to identify the baby’s mother, two murders and an abortive bombing involving the protestors lead her—and the infant—into danger.

Aimée Leduc sensed the scent of spring in the air rising from the Seine and spilling through her open balcony doors. A church bell chimed outside; leaves fluttered in the breeze and couples ducked into a nearby brasserie. It was a beautiful night on the Ile Saint-Louis, the island in the heart of Paris.

She ran her chipped gigabyte green fingernails over the laptop keyboard; she had to finish system maintenance and get her client’s network up and running online by nine-thirty. Only twenty-seven minutes to go and she was exhausted, but she knew she’d manage it. All she had to do was concentrate, but after five straight hours, her brain rebelled. She rubbed her black-stockinged calf with her foot. One more system to check, then voilà.

From somewhere under the papers piled on her desk the phone trilled. Miles Davis, her bichon frise, who was nestled at her feet, awoke with a bark.

She heard someone panting and the sound of a wailing siren in the distance.

“Oui?” she asked, in a brusque tone of voice.

“You have to help me!” a strange woman said.

“Go to the courtyard. If they catch—”

“Wrong number, désolée,” Aimee said, about to hang up.

“They want to kill me.” It was a young woman’s voice, rising in panic. “They want my—” Static obscured the rest of her sentence. “Please, now!”

“What do you mean?” Aimee leaned forward, shoulders tensed.

She still didn’t recognize the voice.

Aimee gripped the phone harder. “Me? Look, if you’re frightened, call the flics.”

A car engine started. “No flics, no hospital.”

The hair on Aimee’s neck rose. She hit the callback symbol and got a recorded message saying that the public phone she’d reached couldn’t accept calls.

Twenty-four minutes to her work deadline. But the call had unnerved her; she couldn’t concentrate. It would only take a moment to reach the courtyard. She pressed SAVE and slipped her feet into the black kitten heels under her desk.