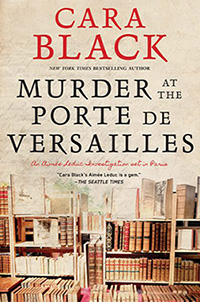 Directrice Bécard’s work phone vibrated on the crowded café’s zinc counter in a frenetic burst. On the blaring télé, sports fans shouted “10 . . . 9 . . . 8 . . .” in the championship game’s last seconds just as she answered.

She strained to hear, her wine glass still in hand. Silly idea to come here for peace and quiet after a long day of meetings at the anti-terrorist unit. Cigarette smoke spiraled to the ceiling. People jumped and cheered. She pressed the phone tighter to her ear.

“Hate to bother you, Madame la Directrice, but you said you wanted to know the latest.”

Her stomach clenched. Had the threat level been raised since she’d left work?

She almost choked on her wine. Merde. She’d feared those words since 9/11.

Protocol kicked in. Trained for emergencies—as if one could ever really be prepared—her brain scrambled to the next step. She dropped a five-franc note and rushed out into the late afternoon.

Once outside, she gulped the chill fresh air and hit redial. “Give me more on the threat level status.”

“I’m across the street. Is this confirmed? Do you have a location?”

“Confirmed.” Castel, her department colleague, sighed. “But no location.”

She ran on rue de Dantzig past the wall plaque—a memorial to a local résistant shot here in the war. A faded bouquet tacked onto it shriveled in the shadows. Through the tall metal and glass Deco door, she entered the building complex home to the bomb squad, the laboratories and scientific police, and arson investigation. She crossed the lobby, nodding to the duty clerk, who gestured her upstairs.

Fluorescent lights flickered on the scuffed vanilla walls and brown tiled stairs as she padded to the top of the building to what they used for a situation room.

Panting, she looked down the glass-windowed hallway reflecting the ribbon of the Seine, backlit by a sky lush with burnt orange.

“Here’s the latest,” said Castel, handing her a printout from the ministry. Five or so desks occupied by techs sat near hastily mounted wall maps.

Aimée Leduc’s eyes misted under the lead-grey sky in the Père Lachaise cemetery columbarium. She placed white chrysanthemums at her father’s niche. Filled with the lingering ache of loss, she kissed his name etched in stone: jean-claude. Aimée helped her daughter, Chloé, do the same; the child’s kiss landed with a slobbering effect. Three years old on the anniversary of her grandfather’s death. The bitter and sweet of life.

“I can’t believe it’s been twelve years, Mademoiselle Aimée. But I know he’d be proud of you.” Martin, the only other mourner, had been an informant of her father’s. Every year on this day Martin had mass said for her father. Martin’s oversized glasses, silver pompadour, and leathery tan—even in November—gave him the appearance of a seventies-era film producer at Cannes. He dabbed his nose with a handkerchief. “I miss him.”

Aimée squeezed his arm. “I miss him, too.” Half the time she still expected her father to walk through the doors of Leduc Detective, flash that lopsided grin of his, and sling his coat on the hook. Following his death, Aimée had taken over the agency, focusing on computer security, earning good money. Fed up with field investigation, she’d recently gone into consulting and qualified as an expert witness for court testimony. It gave her more time with Chloé.

A mosaic of yellow and orange leaves crisped into gold over the cemetery’s charcoal cobbles. On a mausoleum, damp oozed from moss on an angel’s wing, the cracked stone frozen forever in flight.

Aimée opened her umbrella to the patter of drizzle. A broom scraped as a bent old woman, her scarf tied under her chin, swept leaves off a gravestone.

Martin ruffled Chloé’s blonde curls as she tottered on the slick stones and grabbed his leg for support. “Bon anniversaire, ma petite.” He held out a Printemps box as big as Chloé.
Chloé’s laughter numbed the welling sadness. Time to move on, Aimée told herself—she had a daughter to raise. At that, her phone chirped. The message was from her partner, René—a reminder that she had a business to run, too.

“Voilà,” she said, scooping Chloé up in her arms. “Now it’s time for your birthday party, ma fille. Grand-père would like that.”

Martin nodded. “He’s watching over you, his two beautiful mesdemoiselles.”

They embraced goodbye among tombstones freckled with mold and lichen. Aimée wondered, noticing Martin’s age and faltering step as he walked away, if it was for the last time.

Fuchsia helium balloons and pink streamers bobbed in Aimée’s high-ceilinged seventeenth-century Ile Saint-Louis flat, the place warm for once from the body heat of partygoers and the sputtering tapers in their silver candelabras. Chloé ran past in her furry leopard-print boots, an early gift. She wouldn’t take them off, had even slept with them on.
Already a petite fashionista.

It was a circus, Chloé chasing little Miles Davis, Aimée’s bichon frise, and preschoolers trailing streamers and squealing in delight. The birthday party would end soon.

Martine Sitbon, Aimée’s best friend since lycée, a writer for Libération and a party animal, had conned her into not only throwing the birthday party but also having it catered. With her hair dyed pink for the occasion, Martine danced into the salon holding a chocolate-raspberry gâteau with three candles.

At last, Aimée thought. Not only were the three-year-olds restless, but their parents had been glancing at their watches for the past twenty minutes. It was, after all, a school night.

Aimée pinged a wine glass with her fork. “Attention!”

She nodded to René, Chloé’s godfather, to capture the moment with his video camera. René struggled to climb up on a chair, brusquely refusing help from a parent who’d offered him a hand. A dwarf at four feet tall, he prided himself on being self-sufficient. His black belt in karate helped in that department.

René panned the video camera as Chloé’s puffed cheeks blew out the candles to rousing cheers. Lifting her up was Melac, her biological father, whose grey-blue eyes she’d inherited. Beside them hunched Morbier, Aimée’s white-haired godfather, his basset-hound eyes crinkled with laughter as he pulled out the candles for Chloé. Michou and Boris Viard, a gay couple who were René’s neighbors and close friends of Aimée’s, blew her kisses.

Yet Chloé’s grandmother, Sydney Leduc, was a no-show. Typical. Aimée’s American mother, a seventies radical who had once been on Interpol’s Most Wanted List, had taken a therapeutic “cure” at a salt spa outside Kraków. But a check with several zeros drawn from a Swiss bank account had arrived for Chloé’s “education.”

Aimée wiped the crumbs off her bébé’s cheeks, moved by the candlelit faces shining with love for her daughter.

Michou, his eye makeup perfect, popped a cork; vintage champagne flowed. Boris, in black leather with streamers in his hair, lifted Chloé into the air and kissed her. “I can’t believe my favorite fille is so big!”

Chloé kissed him back, grinned, and raised three chubby fingers. Aimée was so proud that her daughter attended the école maternelle around the corner, Aimée’s own alma mater. She took in another glimpse of Michou and Boris, etching this picture of them into her mind. She loved these two and often relied on them as backup babysitters.

As Martine sliced the cake, Melac took Aimée’s hand—his thumb catching on the gold bracelet he’d given her—and leaned into her ear. “Next year, we’ll have her birthday on the farm in Brittany. Everyone will come. Chloé will love it.”

Not this again. A former flic, Melac ran a corporate security business and wanted to be more than a part-time dad. He also wanted to leave the city. Aimée’s thoughts ricocheted.

Live on Melac’s farm, work remotely, and look out her window to see goats, not the Seine?

“It’s healthier by the sea, out in nature. What do you say, Aimée?”

If only this appealed to her. Was it selfish not to think of how it might benefit Chloé? She had to stall.

“Don’t brush me off again.” Hurt edged his voice. “I’m tired of waiting.”

“I told you, I’m thinking about it. Seriously.”

His gaze read her indecision.

“You need to decide now.” His tone notched up in irritation. “What’s so difficult about this? It should be an easy choice.”

Pack up and go just like that? What about Chloé’s friends? Her school? Not to mention Aimée’s whole life and her business were here. Her relationship with Melac had been fraught after Chloé was born; he’d disappeared, then returned at her christening with a new wife, wanting custody. They’d finally come to an arrangement, then the wife left and Melac became more of a constant in their lives.

Could she trust him?

As usual, he’d picked the worst time for an ultimatum. She needed to hurry the party along.

She stood, summoned a smile, and raised a champagne flute. “Time to open presents.”

Boris clapped his hand over his mouth. “Quelle horreur!”

Everyone turned and looked at him.

“I had Chloé’s present sent to my office,” he explained. “It’s sitting on my desk at the police lab.”

“Désolé,” Boris said, shamefaced. “I feel so stupid for forgetting.”

“Don’t worry,” Aimée soothed. “Just pick it up another time.”

But Boris, after downing a flute of champagne, had piled into a taxi at quai d’Anjou.

After the ensuing flurry of presents and the departure of the children and their parents, Aimée swapped Chloé’s sticky, sugar-smeared polka dot dress for pajamas. Done, she returned to the salon with Chloé on her hip to say goodnight. She took in the scene before her. On the floor, the stuffed bunny from Morbier, his replacement for the one dropped in the Seine. Laughing Martine, blowing Chloé kisses from across the room. Morbier in the Louis XVI chair next to Melac, deep in conversation, relaxed for once, talking flic to flic. As she’d often seen Morbier do with her father, his first partner.

How could she have ever thought herself an orphan? Even if her mother was nowhere to be seen, here was family.

She gathered up the ribbons, fashioned a bow and tied it around Miles Davis’s collar.

“Poor Miles Davis,” said Morbier, pronouncing it Meelz Daveez. “And catering a kiddie party? Really, Leduc?” Morbier grunted as he got out of the chair.

Always a critic. She wouldn’t let him fault her nonexistent culinary skills. The next minute he’d accuse her of spoiling Chloé, something he did shamelessly.

“You seemed to enjoy it,” she said, brushing specks of foie gras off his jacket sleeve. “Or should I have left the baking up to you?”

Everyone kissed a sleepy-eyed Chloé goodnight and bid adieu. When Melac took Chloé from her arms to put her to bed, Aimée realized Boris hadn’t returned.