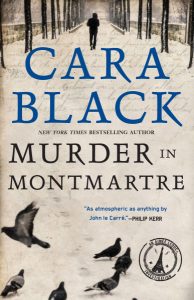 “Chilling…. The book vividly depicts a gritty, working-class part of Paris…. Black succeeds in making the reader feel the damp, the snow, the fear.”
—Publishers Weekly

“As always, Black uses landscape for far more than window dressing, incorporating details of Montmartre history into the fabric of the plot… A common theme running throughout Black’s consistently engaging series is the frustration of various immigrant groups trying to live in and around Paris, a topic of ever more urgent concern.”
—Booklist

Aimée’s childhood friend, Laure, is a policewoman. Her partner, Jacques, has set up a meeting in Montmartre with an informer. When Laure reluctantly goes along as backup, Jacques is lured to an icy rooftop, where he is shot to death. Laure’s gun has been fired, gunpowder residue is found on her hands, and she is charged with her partner’s murder. The police close ranks against the alleged cop killer. Aimée is determined to clear Laure. In doing so, she encounters separatist terrorists, Montmartre prostitutes, a surrealist painter’s stepdaughter, a crooked Corsican bar owner, and learns of “Big Ears”—the French “ear in the sky” that records telephonic and electronic communications—which the Security Services monitor.

Aimée Leduc’s heels sank into the snow-crusted surface of the Paris street, quiet and deserted except for the whisper of ghosts. There were always ghosts, she thought, and they were even more poignant at this time of year: souls, wandering at night over the cobblestones, flitting through the dark paved courtyards, leaving exhalations of the past behind them.

The metallic edge to the winter air promised a storm. Below her, ice-veiled barges surrounded by escaping steam swayed on the surface of the slow-moving Seine. Quayside lights pricked the black water like so many stars. The hushed night noises, absorbed by the new-fallen snow, seemed planets away.

She hurried along the Ile St. Louis quai to her building, a relic of the seventeenth century, and mounted the steps, worn into grooves with the passage of time. Inside her cold apartment she met stale air and darkness. Disappointed, she hung her bag on the hook by the door. It was the third time this week Guy had been out at night, on call.

She heard a click, just audible. Alarmed, she switched on the light and called out, “Guy, is that you?”

He stood in the doorway facing her, his white evening shirtcollar unbuttoned, hands in his tuxedo jacket pockets, the expression in hisgray eyes unreadable.

She gasped. Caught up in work, she’d forgotten the reception he was hosting as department head for Doctors Without Borders!

“I was late for the reception,” he interrupted. “When I reached the hospital there was an emergency waiting for me. I was four minutes away from my patient’s losing his sight tonight. If I’d been there on time … but I waited for you.”

A hot flush spread over her cheeks. “Work! I’m sorry, you should have gone ahead without me, I didn’t think—”

“You know, at medical school they taught us to identify, isolate, and incise a malignancy,” he said.

Her muscles tightened. A cold chill emanated from him.

“And to remove it before it spreads, engulfing the organs, choking the lymph systems.”

He headed to the bedroom, pausing in the doorway to say, “Which crisis this time, Aimée? The computer crashed, you were chasing an account that hasn’t paid, you were lost on a hacking trail, or René left early and you had to cope?”

“Not bad. Three out of four, Guy.” She wanted to feel the warmth of his surgeon’s hands on her skin, his wonderful hands; his tapered fingers that had stroked her spine under the silk duvet last night.

A lost look crossed his face. Then it was gone. “It’s not working, Aimée.”

He opened the armoire and threw shirts into a duffel bag. He was serious.

“You’d flunk out of the navy,” she said, blocking his path.

“You jump ship at the first sign of rough water.”

“We’ve had this argument before.” He shook his head, looking down. “I wanted us to work.”

“But it’s not just me,” she interrupted. “You’re always on call, you go away for three weeks at a time to medical conferences!” She left out the holidays and Saint Sylvestre, New Year’s Eve.

Stupid. Why had she said it? Never rely on a man. Or let them know that you do.

“Guy, I’ll tattoo your schedule on my brain.” She reached out and pulled him to her, enveloping herself in his arms. “Nothing ever felt like this before.”

He traced his warm finger along her cheekbone. She closed her eyes, inhaling his lime vetiver scent. She felt something land in her pocket with a metallic sound.

“Here are your keys,” Guy said.

“Let’s work this out,” she said, fighting her fear. Why had she ignored the warning signs?

“It’s better this way, Aimée. For you and for me. I’m sorry.” He grabbed the duffel bag, strode through the hall.

He was out the door before she could stop him.

Crushed, she ran to the window and pressed her nose against the cold glass as she watched him get into a taxi on the quay below. She heard the door slam and the taxi’s tires churn away over the slush. Her eyes welled with tears. Two months of living together, trying to… he was the man who’d saved her eyesight, who had written poetry about her… Now he was gone, just like that!

Relationships… she didn’t get them. Shouldn’t people take each other as they found them? She’d blown it. Again.

She sank onto the duvet, stunned, and grabbed the pillow. She found herself clutching one of his socks. She remembered lying in bed at sunrise as the blood orange sun peeked above their toes outside the window, how his long fingers brushed her thigh, the bowl of steaming café au lait he’d prepared resting next to the thick Le Monde diplomatique on the balcony awaiting Sunday morning reading. She remembered how his nose wrinkled when he laughed. She buried her face in the pillow. Punched it. Trying to shut out the hollow ache inside her.

A jade bangle, green and luminous, hung by the beveled mirror, on the birch branch where she kept her jewelry. It caught the gleam from the barge lights. It had been given to her by an old Vietnamese woman for good luck. She felt its cold smoothness as she slipped it onto her wrist, then pulled on a black down jacket, looped two wool scarves around her neck, and descended the drafty stairs, her heart leaden, to walk her dog.

A January night, and she felt as if she and Miles Davis were the only ones in Paris. Except for the ghosts.

She had lost her man.

A barge floated by with red Christmas lights still strung along the sides, framing the flat deck. A scratchy strain of a song accompanied by an accordion, reached her and she heard the lapping of wavelets.

Miles Davis wandered along, sniffing around the metal grille that surrounded the base of a leafless tree. She rubbed the jade but no reassuring warmth answered.

Her cell phone vibrated in her coat pocket. Guy?

“Bibiche!” She recognized Laure Rousseau’s voice. Laure was the daughter of her father’s first partner, and the endearment was the one she’d used since they were eight years old. “Come celebrate, Ouvrier’s retiring. Remember him?”

Ouvrier was a horse-faced flic from her father’s old Commissariat. She heard conversation and the pinging of a pinball machine in the background. A bar? Not her scene, with a bunch of old flics reminiscing and drinking, the type who’d joined the force before the earth’s crust had cooled.

“The seat next to me is warm,” Laure said.

“Place Pigalle, you remember L’Oiseau?” Singing erupted in the background.

She’d prefer falling off a stool with Laure to drinking by herself at the corner bistro.

Aimee looked down. The snow crystals crunched below her feet. Miles Davis had finished; she could take him upstairs.

“I’ll grab a taxi. See you in fifteen minutes.”