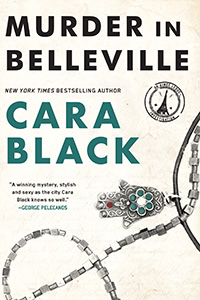 “Some of Black’s strongest writing is in her descriptions of Belleville’s heady atmosphere… Aimée, never one to take non for an answer, smartly hones in to pull off a thrilling finale that nicely exhibits the author’s creative skills.”
—Publishers Weekly

“Aimée Leduc returns in Black’s atmospheric second look at the City of Light’s dark corners…. blurring the edge between mystery and thriller, Black makes April in Paris more spine-tingling but more beautiful than ever.”
—Kirkus Reviews

Tensions run high in the working-class neighborhood of Belleville, known for its high concentration of Arab immigrants, when a hunger strike to protest against strict immigration laws escalates. Aimée is trying to help her old friend Anaïs, the wife of the interior minister, who had intended to confront Sylvie, her husband’s mistress. When a car bomb fueled by Algerian plastique takes Sylvie’s life, Anaïs begs Aimée to unravel the tangled threads that led to her death. But Aimée herself barely escapes with her life as she pursues terrorists among the Algerian nationalists and Islamic fundamentalists who have formed an underground North African network in Paris.

Aimée Leduc’s cell phone rang, startling her, as she drove under the leafy poplars tenting the road to Paris. For a moment she’d felt as if she were flying—flying into spring, away from the winter, when her broken body needed to heal.

Aimée groped around in her backpack until she found her phone wedged next to her ultrablack mascara. Freeing it from her extra sweater, snarled on a software encryption manual, she finally flicked it open.

“You have to help me,” Anaïs interrupted.

Several years had passed since Aimée had seen her. “What’s the matter, Anaïs?”

Aimée pushed her black sunglasses down on her nose and ruffled her short, spiky hair. How typical of Anaïs—everything revolved around her. A dull pewter sky blanketed the suburb of Aubervilliers. Within minutes the sky opened, and rain blanketed the road.

“Right now I’ve got to drop some work off, Anaïs,” she said with growing impatience.

“Martine talked to you, didn’t she?” Anaïs asked.

Impatience turned to guilt. Despite her promise to do so, she’d never called Anaïs after Martine spoke with her. Anaïs suspected her husband, a government minister, of having an affair. Computer security, Aimée had protested, was her field—not spousal surveillance.

The phone reception wavered and flared.

She didn’t want to interrupt her work. Thanks to a client referral, she was dropping off a network systems security proposal at the Electricité de France. Aimée prayed that this would get Leduc Detective back on its feet after a lean winter.

“Please, we have to meet,” Anaïs said, urgency in her voice. “Rue des Cascades… near parc de Belleville.” Anaïs’s voice came and went like a piece of laundry whipping in the wind. “I need you.”

“Of course, as soon as I finish. I’m on the outskirts of Paris,” Aimée said. “Twenty kilometers away.”

Aimée felt torn. She heard a muffled noise as if Anaïs had covered the receiver with her hand.

“Café Tlemcen, an old zinc bar, I’m in the back.” Anaïs’s voice broke. “… get caught…”Aimée heard the unmistakable shrieking of brakes, of shouting.