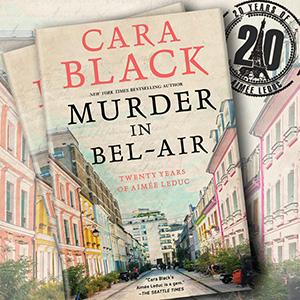 “Aimée Leduc’s nineteenth adventure is one of her best… this is a deeply satisfying and entertaining novel.”
—Booklist (Starred Review)

“Gripping… Black takes the reader on a whirlwind tour of Paris, both the well- and less-well-known sections, and Aimée never leaves home without oozing style. Longtime fans and newcomers alike will have fun.”
—Publishers Weekly

Aimée Leduc is about to go onstage to give the keynote address at a tech conference that is sure to secure Leduc Detective some much-needed business contracts when she gets an emergency phone call from her daughter’s playgroup: Aimée’s own mother, who was supposed to pick up Chloé, never showed. Abandoning her hard-won speaking gig, Aimée rushes to get Chloé, annoyed that, yet again, her mother has let her down.

But as Aimée and Chloé are leaving the playground, Aimée witnesses the body of a homeless woman being wheeled away from the neighboring convent, where nuns run a soup kitchen. The last person seen talking to the dead woman talking to was Aimée’s mother—who has vanished. Trying to figure out what happened to Sydney Leduc, Aimee tracks down the dead woman’s possessions, which include a huge amount of cash. What did Sydney stumble into? Is she in trouble?

The young woman stumbled on the cobblestones in her worn shoes, fist in her pocket, clutching the steak knife she’d nicked from the café. She’d felt eyes watching—fear had charged up her back, impossible to ignore. Her gut had screamed at her to get out of there.

A car engine revved up, gears scraping. She glanced back and saw a black Renault slide onto Boulevard de Picpus. Her heart pounded.

Walk faster. Keep going. Past the boule players and around the bandstand. The sky was oyster grey. She could make it to the Métro station at Picpus.

At École Saint Michel, parents and small children waiting for school dismissal clogged her path until they took in her homeless appearance, which made them scatter. The swollen clouds opened in a downpour.

She heard the car’s clutch grind.

She broke into a run, lungs heaving, shoelaces flying. Turned the corner onto Avenue de Saint-Mandé. She could hear the car gaining on her. Any moment it could jump the median, ram her against the stone wall. Dripping wet, she sprinted toward the Métro steps ahead of her. She could make it. Get the documents to the only person she trusted and prevent a disaster.

A car door slammed. Footsteps slapped the wet pavement behind her. What if she got stuck on a platform—caught in the Métro? She reconsidered.

The double-grilled gate to a nearby building’s courtyard was standing open as a car pulled out. In the pelting rain, she ducked inside, ran through the courtyard, scrambling past the parked cars and through an open portion in the fence to the empty adjoining lot, which was being paved. Its old gate opened onto a convent’s grounds.

She skidded on the wet grass, perspiring in her oversized jacket, and ran along the stone wall. Past the cemetery, through the brown wood door to the tree-lined convent grounds. No one would find her there, at the Petites Soeurs des Pauvres homeless shelter. Through the grey haze of rain and the branches of the fig trees, she could make out the white habit of the intake nun.

And then she was caught from behind. She gripped the steak knife in her pocket and whirled around—she recognized the man.

She struggled as he pushed her against the wall. Kicked at him desperately.

She tried to scream, but he covered her mouth with his hand. His sour breath in her face. She fought to aim the knife at him.

But he caught her fist in a grip like an iron vise and twisted, turning her own force against her. Trained reflexes, she thought—her last thought, as the steak knife plunged into her neck so deeply it hit the wall behind her. Blood pumped out of her carotid artery, staining the raindrops on the rhododendron blossoms. Her eyes glazed and the grey went black.