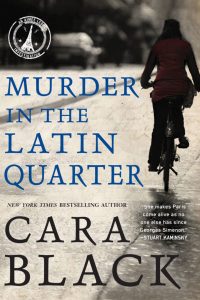 “The ninth mystery in Cara Black’s irresistible series set in Paris… might well be the book we’ve been waiting for. Aimée Leduc, Black’s adorably punkish sleuth, is in her element.”
—Marilyn Stasio, The New York Times Book Review

A Haitian woman arrives at the office of Leduc Detective and announces that she is Aimée’s sister, her father’s illegitimate daughter. Aimée is thrilled. A virtual orphan since her mother’s disappearance and her father’s death, she has always wanted a sister. Her partner, René, is wary of this stranger, but Aimée embraces her and soon finds herself involved in murky Haitian politics leading to murder. Aimee finds herself caught up in a murderous paper chase, one where even her godfather, Commissaire Morbier, has doubts about her innocence. The setting is the Latin Quarter on the Left Bank of the Seine, in the old university district of Paris.

Aimee Leduc’s fingers paused on the keyboard of her laptop as she felt a sudden unease but it vanished as quickly as the mist that curled up under the Pont Neuf. At least, she thought, thanks to the cleaning lady, the chandelier gleamed, the aroma of beeswax polish hovered, and Leduc Detective’s office shone. For once. It should impress her high-powered client, the Private Banque Morel’s administrator, who was due in ten minutes.

Aimee checked for lint on her Dior jacket, a flea-market find. She heard a footstep and looked up expectantly.

A woman in her late thirties stood in the doorway to the office. She was a tall, light-complected mulatto, wearing a denim skirt and clutching oversize sunglasses in her hand. She stepped inside, her gaze taking in the nineteenth-century high ceilings and carved moldings as well as the array of computers.

“This place isn’t what I expected,” said the woman in lilting French. She had an accent Aimee didn’t recognize.

“Maybe you’re in the wrong place, Mademoiselle,” Aimee said, irritated. “Our firm handles computer security only.” She ran her chipped red fingernails over the Rolodex for the card of a female private detective in the Paris region.

“Non.” The woman waved the card away. She’s persistent, Aimee thought. And for a brief moment, as the breeze fluttered through the open window and a siren whined outside on rue du Louvre, Aimee sensed that she was being subjected to a curious scrutiny. It was as if this woman was measuring and found her, like the office, wanting.

Aimee glanced at her Tintin watch impatiently. “As I told you—” Aimee’s cell phone beeped. “Excuse me,” she said and dug in her bag, found it, and listened to the message. The client she expected was in a taxi… minutes away.

“The owner of this establishment knew my mother,” the woman said. Her accent was now more pronounced.

Even after all this time, former clients called expecting to find him, Aimee thought sadly. “You’re referring to my father, Jean-Claude Leduc,” she said. “But he passed away several years ago.” She used a euphemism instead of graphically describing his death during a routine surveillance in the Place Vendome from an exploding bomb.

“Passed away?” The woman blinked. “And you’re his daughter?”

“But you don’t understand.” The woman tilted her head to the side, gauging something, ignoring Aimee’s words. Her fingers picked at the strap of her straw bag.

“Understand? Mademoiselle, I am waiting for a client who is due any moment.” She checked her phone again. “Make an appointment, and then I’ll see what I can do for you.”

“That’s him, non?” The woman pointed to the photo behind Aimee’s desk. It was of her father caught in time: younger, his tie loose, grinning. The one Aimee kept to remind her of what he’d looked like alive, not the way she’d last seen him, charred limbs on the morgue’s stainless-steel table all that remained after the explosion.

“Our father,” the woman interrupted. “I’m your sister, Aimee.”

The phone fell from Aimee’s hand.

“It took time to find this place, to make sure,” the woman said. Her voice quavered, her confidence evaporating. “And to summon the courage to come here. I need to talk with you.”

Stunned, Aimee looked for some resemblance in the almond-shaped eyes, the honey color of the woman’s skin, the shape of her mouth: that full pout of the lips, those white teeth. Could her father have had another child?

“You have proof? I’m sorry, but you walk in here and claim you’re my sister,” Aimee said. “How do I know you’re that what you claim is true?”

“You’re shocked,” said Mireille, her voice urgent. “Me too. I had no idea until three weeks ago. During the coup d’etat, I had to leave Haiti. I only found out…”

“Your father and my mother had a relationship in Paris, before you were born,” the woman said. “I can show you photos.”

Aimee felt the air being sucked out of her lungs. Glints of afternoon light refracted from the prisms of the chandelier into myriad dancing lights. It was as if she’d been hit by a shockwave; words froze in her throat.

The wire cage elevator whined up to the office landing and rumbled to a halt. Her client had arrived to tell her the verdict. Would Morel, a prestigious private bank, extend Leduc Detective’s data security contract?

“I never knew my father,” said Mireille. Her mouth pursed. “Was it a one night stand or a grand amour—who knows?”

“That’s not like Papa. He wouldn’t have fathered a child and just—”

“Mademoiselle Leduc?” A smiling middle-aged woman in a navy pantsuit knocked on the frosted glass panel of the open door. “Am I disturbing you?”

“Of course not, Madame Delmas, please come in.” Aimee forced a smile, stuck her trembling hand in her pocket, and gestured to a Louis Quinze chair with her other. “The data analysis report’s ready.”

Perspiration dampened Aimee’s collar. “Why don’t you start reading the report while I see my visitor out, Madame?”

Mireille paused next to Aimee on the scuffed wood of the landing, a vulnerable look on her face. “Maman went back to Haiti. I don’t know if he knew she was pregnant.”

A cough came from inside Aimee’s office. One didn’t keep a client like Madame Delmas waiting.

The woman calling herself Mireille Leduc gripped Aimee’s hand hard. Hers was as hot as fire. A thin red string encircled her wrist. “Mesamey,” she said.

“Mesamey is the Kreyol word… I don’t how you say it in French. I’ve only been here a week. Would you say surprised?”

Aimee felt a frisson course through her. “But what do you want?” she asked.

“Please, I lost my papers. I didn’t know who else to ask.”

Mireille nodded. “But I can prove we’re sisters. I am in some trouble. I thought my father could help. This man who’s been helping me gave me a file, and…”

Madame Delmas’s chair scraped on the floor, a fax machine whirred, and the office phone rang.

“I’ll wait for you in the corner cafe,” Mireille said. “You’ll meet me, Aimee?”

What else could she do? Aimee nodded. Her eyes followed Mireille down the dim spiral staircase until the last glimpse of her curly hair disappeared. She could still feel the heat of Mireille’s hand on hers. Then she realized she didn’t know her address or even how to reach her.